This luxurious 4-star Hotel combines modern and sophisticated facilities with a traditional touch of West Java culture. Located near the administrative center of Bandung Regency with a beautiful panoramic view of South Bandung. This property is famous as one of the most captivating perfect escape spots. The Hotel is a 5-minute drive from Soreang – Pasir Koja (Soroja) toll Gate and a 30-minute drive from Bandung International Airport and train station. Discover the unique and delicious flavours of the restaurant while dining at our hotel. Enjoy an enticing dining options and satisfying culinary experiences to delight every palate in the choices of local and international dishes for breakfast, lunch or dinner.

With seven contemporary and flexible function rooms including Degung Grand Ballroom, you can meet and do business with leisure activities. Whether you are planning to host a wedding up to 2.000 persons or an informal business meeting off site, our meeting rooms combine state of the art technology with a warm ambience and an authentic Indonesian culture decoration to create the perfect venue for every occasion. 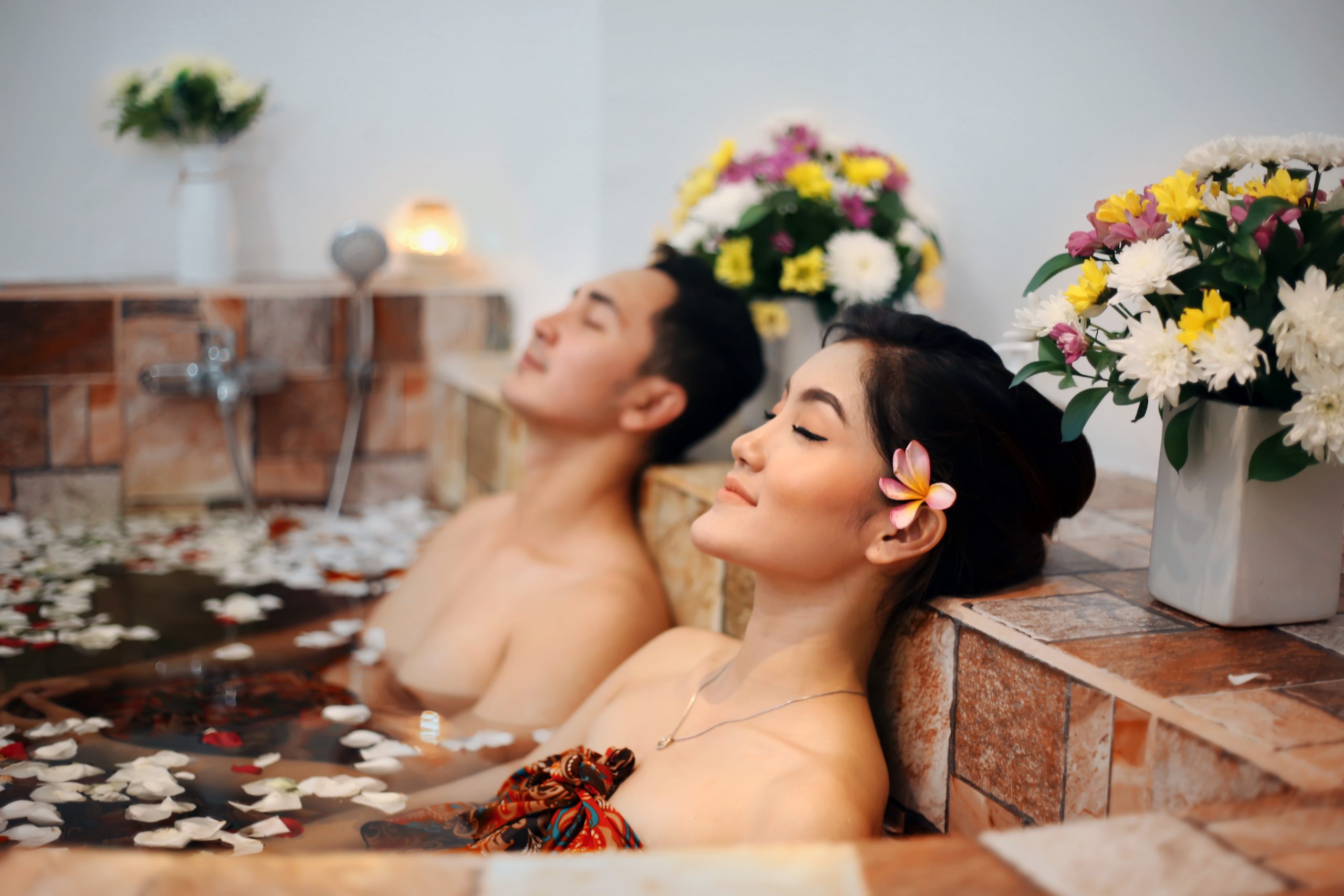 We provide much more than just accomodation during your stay including healthy and wellness center for various treatment options, that makes this hotel a perfect place for business and leisure 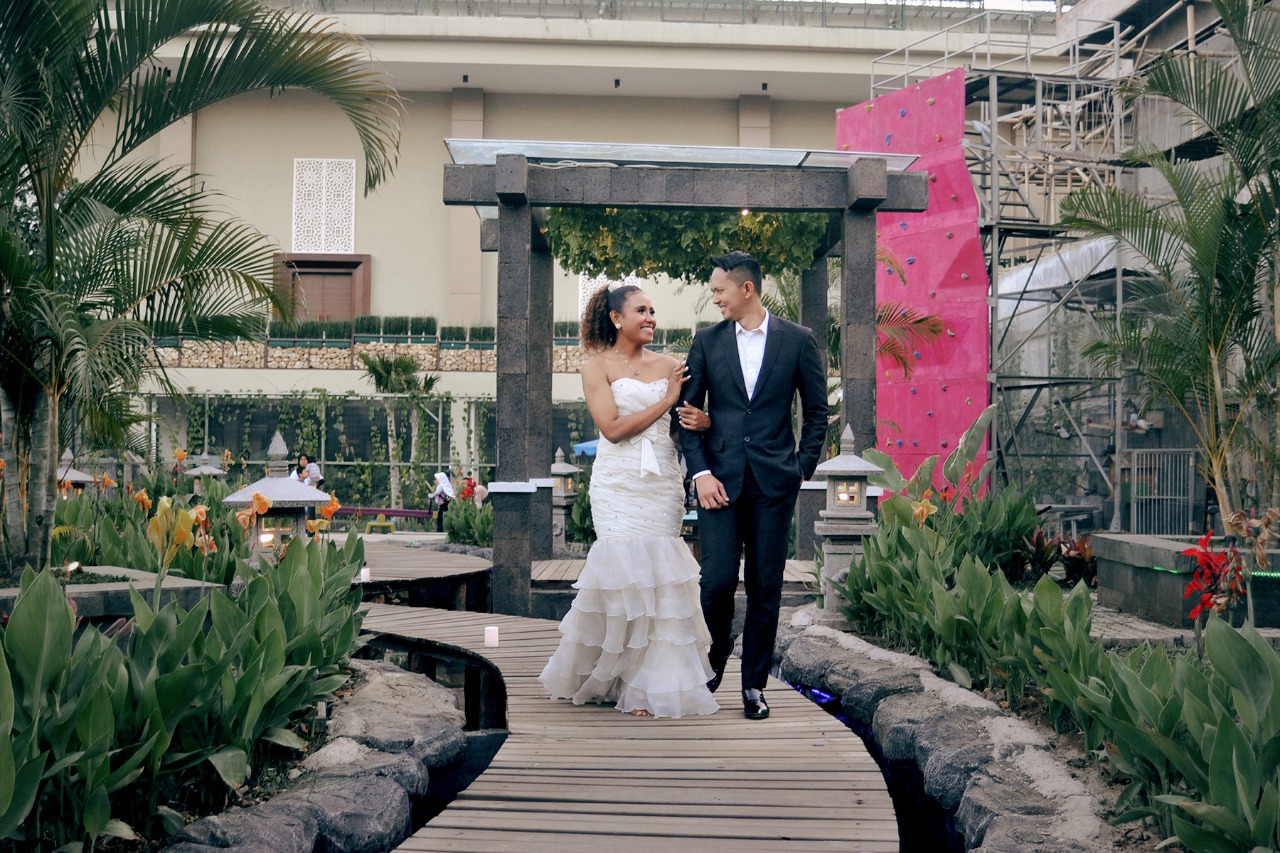 We provide the best service and a forgotten way to create your events to be above your expectations such as weddings, birthdays, arisan and others

We provides you a comfortable smoking room at 6th, 7th and 8th floor.

We have successfully received halal certification …

After a stressfull day, our karaoke can be the good alternatives to refresh your day …

Table manners are the rules used while eating, which may also include the use of utensils Each family or group sets its own standards for how strictly these rules are to be used…

For those who curious about his moment at our hotel. Go check @kokokuliner on Instagram (link).

Thanks to this beautiful woman @vinavinafan who made her wonderful cover video at our hotel! And the video was come out beautifully.

For those who curious about her moment at our hotel. click here to know how the beautiful resort

We are really sorry to announce that our Aviary is temporary closed for routine maintenance and cage refurbishment. Once again, we’re so sorry for the inconvenience caused.

Proud to announce, we are now CHSE Certified (Cleanliness, Health, Safety and Environment)

For those who curious about her moment at our hotel. Go check @icajesse on Instagram (link).

For staycation or your perfect escape

Thanks to this beautiful woman @vinavinafan who made her wonderful cover video at our hotel! And the video was come out beautifully.

Vina fan is a youtuber famous for her cover dance work bollywood songs
In addition to the staycation he also made one of his cover videos using the palm garden background.

For those who curious about her moment at our hotel.

We had so much fun with @kokokuliner.

Kokokuliner is one of the bandung food celebgrams who have stayed at Grand Sunshine Resort & Convention hotel, starting from staying in a family type room with the privilege of a spacious courtyard equipped by swings, gazebo and very beautiful view.
Breakfast buffet with dishes ranging from Indonesian cuisine, traditional sundanese to international complete with healthy menu, in addition our resort that actually implements covid protocol in the restaurant
We also serve signature dish nasi liwet package for lunch and indian menu for dinner such as mutton briyani and othersHe enjoyed our authentic foods from 3 different restaurants. And we’re so happy to see his delightness after ate our foods.

For those who curious about his moment at our hotel. Go check @kokokuliner on Instagram (link).

Table manners are the rules used while eating, which may also include the use of utensils. Each family or group sets its own standards for how strictly these rules are to be used. We have 2 kinds of table manner package. Which are student package and executive package. Also, we give our special offer to you IDR 175.000 net/person for student package and IDR 275.000 net/person for the executive package.

Traditionally in Western Europe, the host or hostess takes the first bite unless he or she instructs otherwise. The host begins after all food for that course has been served and everyone is seated. In religious households, a family meal may commence with saying grace, or at dinner parties the guests might begin the meal by offering some favorable comments on the food and thanks to the host. In a group dining situation it is considered impolite to begin eating before all the group have been served their food and are ready to start.

The fork is held with the left hand and the knife held with the right. The fork is held generally with the tines down. using the knife to cut food or help guide food on to the fork. When no knife is being used, the fork can be held with the tines up. With the tines up, the fork balances on the side of the index finger, held in place with the thumb and index finger. Under no circumstances should the fork be held like a shovel, with all fingers wrapped around the base. A single mouthful of food should be lifted on the fork and you should not chew or bite food from the fork. The knife should be held with the base into the palm of the hand, not like a pen with the base resting between the thumb and forefinger. The knife must never enter the mouth or be licked.When eating soup, the spoon is held in the right hand and the bowl tipped away from the diner, scooping the soup in outward movements. The soup spoon should never be put into the mouth, and soup should be sipped from the side of the spoon, not the end. Food should always be chewed with the mouth closed. Talking with food in one's mouth is seen as very rude. Licking one's fingers and eating slowly can also be considered impolite.

Food should always be tasted before salt and pepper are added. Applying condiments or seasoning before the food is tasted is viewed as an insult to the cook, as it shows a lack of faith in the cook's ability to prepare a meal.

Butter should be cut, not scraped, from the butter dish using a butter knife or side plate knife and put onto a side plate, not spread directly on to the bread. This prevents the butter in the dish from gathering bread crumbs as it is passed around. Bread rolls should be torn with the hands into mouth-sized pieces and buttered individually, from the butter placed on the side plate, using a knife. Bread should not be used to dip into soup or sauces. As with butter, cheese should be cut and placed on your plate before eating.

Only white wine or rosé is held by the stem of the glass; red by the bowl. Pouring one's own drink when eating with other people is acceptable, but it is more polite to offer to pour drinks to the people sitting on either side. Wine bottles should not be upturned in an ice bucket when empty.

It is impolite to reach over someone to pick up food or other items. Diners should always ask for items to be passed along the table to them. In the same vein, diners should pass those items directly to the person who asked. It is also rude to slurp food, eat noisily or make noise with cutlery.

Elbows should remain off the table.

When one has finished eating, this should be communicated to other diners and waiting staff by placing the knife and fork together on the plate, at approximately 6 o'clock position, with the fork tines facing upwards.

At family meals, children are often expected to ask permission to leave the table at the end of the meal.

Should a mobile telephone (or any other modern device) ring or if a text message is received, the diner should ignore the call. In exceptional cases where the diner feels the call may be of an urgent nature, they should ask to be excused, leave the room and take the call (or read the text message) out of earshot of the other diners. Placing a phone, keys, handbag or wallet on the dinner table is considered rude.

Enjoy our authentic Indonesian dishes. We give the best dishes in town, especially for you.

After a stressfull day, our karaoke can be the good alternatives to refresh your day. We give a special benefit. Buy 1 hour IDR 150.000 net, will get another 1 hour for FREE. With a large room (capacity until 12 persons). And you can order our delicious light bites.

We have successfully received halal certification for Sunshine All Day Dining, Giwangkara Sundanese Concept & Coffee Shop
Thank you to MUI for helping us from start to finish. 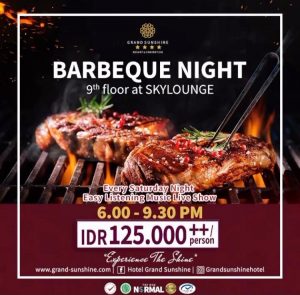 Enjoy BBQ every Saturday night with beautiful view from our Skylounge and listening to live music!